Primal Canine owner and Head Trainer, Mike Jones, is no stranger to setbacks. On the contrary, these setbacks are largely part of what has helped make Primal Canine what it is today: a trusted and respected training facility for even the most aggressive of dogs, and a valued partner to Ray Allen Manufacturing.

Founded 8 years ago, Primal Canine was created to help teach owners and trainers how to communicate with problematic dogs that other trainers gave up on. Today, the business has evolved to include more specialized training for law enforcement and personal protection. 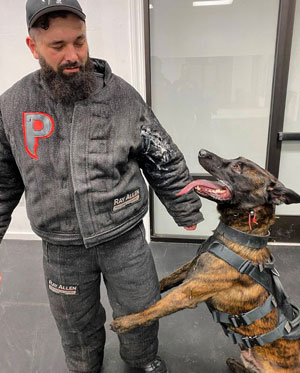 After taking up boxing and mixed martial arts, Mike went through another tumultuous period, and once again found himself working with dogs as a form of therapy. Mike noticed that working with dogs was the key to his peace of mind, and he’s never looked back. Mike Jones has been working with dogs and their trainers for the past 23 years. After getting into trouble as a 13 year old, Mike found solace in working with dogs at the local shelter in his hometown of San Jose. Not only did working with dogs fill him with a sort of inner peace, it also got him out of the house and out of bad neighborhoods.

It wasn’t long until Mike began working as an apprentice at a Schutzhund club, where he learned more than he could have imagined about dog training. The shelter he had previously worked at had focused on understanding and adapting to behaviors in abandoned or abused dogs with positive reinforcement techniques. Schutzhund training was a polar opposite, focusing more on defining and developing traits for protection dogs. Mike noticed the differences in these two schools of thought and wanted to bridge the gap between handlers and their dogs to help develop total understanding and communication between the two. This idea was the spark that would one day become Primal Canine.

The Start of Something Great

After founding Primal Canine, Matt and his team saw aggressive growth. With anywhere from 40 to 50 clients per month, he knew the time was coming that the business would need a much bigger space to adequately serve clients. After setbacks with a location in Campbell, California, The team set up shop in Morgan Hill. It was here that Primal Canine began its relationship with Ray Allen Manufacturing.

During a barbeque at the Morgan Hill facility, Mike received a message from Matt Wilson at Ray Allen. The conversations quickly turned to decoy bite suits and ideas on how to innovate canine training products. Soon after, Mike was on a flight to Colorado to visit Ray Allen, and the two companies have been working together ever since to deliver the best canine training products possible.

After 6 months in Morgan Hill, Mike and Primal Canine faced another setback. Zoning regulations were changing, meaning the company would have to move again. This proved to be a blessing in disguise though, as Primal Canine found its home in Gilroy, California. Surrounded by a great community, Mike knew it was the perfect fit for his growing business.

Gearing Up: The Importance of What You Use

The most important aspect of Primal Canine’s partnership with Ray Allen is the combined knowledge and innovation they bring to canine training. Together, they worked on creating treat pouches for pockets and hoodies as a way to keep dogs from being distracted during training. They work closely to ensure bite suits and sleeves are made with the highest quality and standards to keep both dogs and handlers safe. Even collars and harnesses are meticulously inspected to make sure they’re completely safe for active dogs. 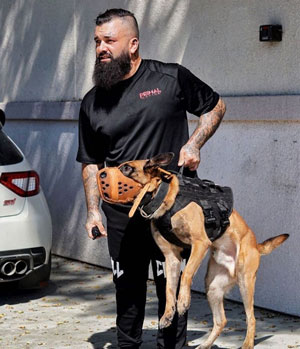 How the Canine Training Landscape has Changed

Mike has seen a lot of changes in dog training over the last 8 years, primarily from the use of social media and digital content. This has had both positive and negative effects. Mike has noticed that it’s gotten easier for people to use social media as a platform for calling out trainers on something they don’t agree with, or something that they perceive as wrong with the way a handler executes training.

But while that’s true, Mike see’s social media working both ways. While some people may use it to disagree with the way training is done, social media can also help people to become more receptive to new training techniques. Primal Canine even goes one step further with their Primal Canine University, an online platform used to share different dog training perspectives. Mike and his team use this platform to remind others that no two dog personalities are alike. Since there’s no single answer to training dogs, it’s important to stay open minded to different techniques.

Looking to the Future

When looking at Ray Allen Manufacturing’s partnership with Primal Canine, Mike sees no ceiling to what’s possible. New and exciting ideas are being developed between the two every day. From tactical semi-comp bite suits to slender decoy armor gauntlets, the sky truly is the limit for what’s next.