"The best friend I've ever had (aside from my wife, of course) was Ace. We got Ace because my previous German Shepherd was hurt and ultimately put down as a result of a car crash. Prior to the accident we had been looking at getting a second dog, so it wasn't just a "replacement", but rather, another companion for the family. And when I found Ace’s breeder, my new bride was not completely sold yet to the idea of adding another dog in the house ... I forget the exact timeline but the long and short of it was we ultimately made the decision to get a puppy from the breeder, after we lost our other dog.

In the time that passed, between our dog being put down and getting Ace, I was without a dog for the first time in my life. My wife would ask if I wanted to go for a walk and my reply to that, and similar inquiries, was often “why would I do that? I don’t have a dog to walk.” (Probably not the best outlook in my new marriage, but she responded with “I don’t like you without a dog.”) Hence why I can never be without a dog again. However, when we were finally ready, there weren't any pups available. So when the time finally came, I gave all control to my wife. To be perfectly honest, I just NEEDED a "best friend" in my life. I was going through a lot of internal pain and fighting a deep depression daily. Much was derived from past personal things. I didn't know how much I truly needed the dog, until much later on.

Upon arriving to view the litter, my wife made it clear that we were not getting an all black dog. Ace happened to be the only sable male left, so she chose him. She also picked his name. Not that I cared much. I was just thankful she was allowing me to have another dog.

We quickly became inseparable. Like 7 year old best friends meeting up at the jungle gym and begging to stay out every night, until it was completely dark. I learned a lot with him. I imprinted him on heroin pseudo and started some detection/tracking training, for no other reason than it was fun. When people would dog sit they'd often tell me that he was a jerk and didn’t listen. I'd laugh, and reply with "well... he listens to me".

As I mentioned before, I can’t say that he actually saved my life because I never had a desire to kill myself, but there were times that I thought I was inevitably going to kill myself. I spent about a year and a half in counseling and when things got bad he was the best escape. I often explained it as, when you are training a dog, you can’t think about anything else other than the dog. My wife would tell me to take him and get away for a little bit, knowing I was getting in my head too much. He would also come up and simply put his head in my lap - as though he knew what I was going through and wanted to help. (He'll never truly understand how much it did help).

After that year and a half or so, my counselor told me she didn’t think I needed to be there anymore and that I could just call her when I needed support. Simply speaking, I “recovered.” Unfortunately that year was the year Ace got real sick. He started refusing food, which led to emaciation, and on to thousands of dollars in vet bills. We finally found out he had terminal cancer and made the call to put him down in January of 2021. That was one of the toughest decisions and hardest days of my life, but I was ultimately okay. I believe he lived out his purpose... helping me get through my mental health issues, healing old trauma, and quieting some demons.

The saddest part was that he seemed to be my sons best friend, too. My son would call for him in the morning and Ace would “chase” my son around the house for 30 minutes or so; like a Tom & Jerry scene. My son would scoot between aces front legs while Ace laid still, just to be close to him. We all miss him very much.

He’s now buried on our property with his favorite Kong (I know he isn’t chewing on it, but it just seemed right at the time to bury it with him). I was hoping he’d get to experience the 7 acres for a lot longer after moving from a small city lot, but at least we got to bury him there.

Their Gear: "I love the Ray Allen E-Lusive 2.0 ID Collar because it made putting Ace's e-collar on faster and easier, allowing more freedom and comfort for my dog." 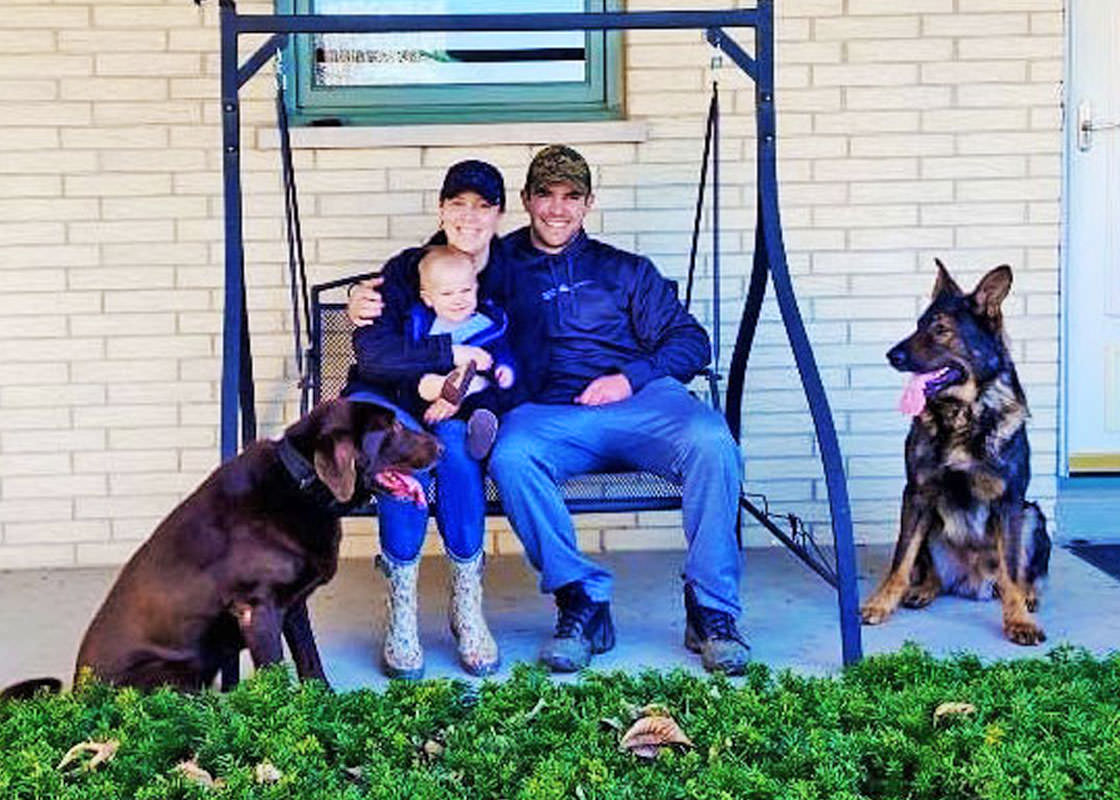