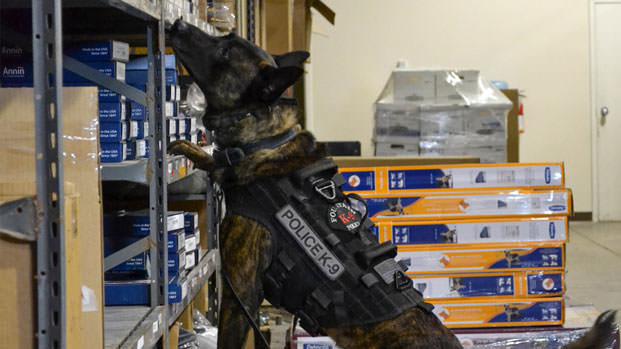 This past September, the State of Arizona tackled the issue of whether a dog sniff (odor) provides probable cause to search in light of the fact that the State of Arizona has legal medical marijuana. Surprisingly, one court of appeals decided “YES” and the other decided “NO”. This article will briefly explain the reasoning for each case. We will have to see in the near future, who the Arizona Supreme Court resolved the conflict.

In State vs. Sisco, the appeals court held that the government’s argument did not hold water, “Despite these developments, the state maintains the odor of marijuana still supplies probable cause to suspect that an offense has been committed under § 13–3405, both as a general matter of law and under the facts of this particular case. We disagree on both points.”  They went on to explain “When a law enforcement officer is aware of certain items in a place to be searched but is unsure about their legal status, “the critical question is whether such items [are] connected with ... criminal activity.” Buccini, 167 Ariz. at 556, 810 P.2d at 184. Unless the items are “ ‘inherently criminal,’ ” the absence of any additional facts suggesting a criminal connection renders the discovery of those items insufficient to support a finding of probable cause.”

“Under our current statutory regime, the odor of marijuana does indicate the presence of a substance that might be possessed illegally. However, a reasonable, prudent, and cautious person could not, in the absence of further information, form a well-founded belief that a criminal offense was committed. Just as the possession of a prescription drug does not provide probable cause to suspect a drug offense under A.R.S. § 13–3406(A)(1) (Medical Marijuana), the mere scent of marijuana does not provide probable cause to suspect a crime under § 13–3405. A contrary conclusion would erase the distinction between lawful and unlawful marijuana at the heart of the AMMA (Arizona Medical Marijuana Act), and it would authorize dragnet police practices that would capture “any number of ... individuals not engaged in criminal activity.”

“First, it misunderstands the nature of the right at issue. The requirement of a search warrant exists to protect a person’s privacy interests, Hyde, 186 Ariz. at 268, 921 P.2d at 671, and those interests receive no protection once someone’s privacy has been invaded. A subsequent legal defense to a criminal conviction provides no relief from an invasion of the privacy that the Fourth Amendment protects. For that reason, as we explained above, the likelihood that a person is not guilty of any offense necessarily has a place in a probable-cause determination. See Crocker, 97 P.3d at 96. An ex parte warrant hearing affords no opportunity to assert a defense, prevent a search, and preserve one’s constitutional right to privacy. See A.R.S. §§ 13–3914, 13–3915; Frimmel, 236 Ariz. 232, ¶ 26, 338 P.3d at 979. Accordingly, “[t]he law requires the judgment of a judicial officer,” before trial or the appointment of counsel, to determine “when the right to privacy must yield to the right of search.”

“Second, the statutory-defense argument simply proves too much. Marijuana possession is broadly criminalized, except as authorized under the AMMA, § 36–2802(E), but so too is the possession of prescription only drugs. See A.R.S. §§ 13–3406(A)(1), 13–3412(B). We have long recognized that having a prescription is a defense to a drug-possession charge, see State v. Armstrong, 176 Ariz. 470, 475, 862 P.2d 230, 235 (App.1993), with “[t]he burden of proving one is within a protected category” placed on the defendant. State v. Cramer, 174 Ariz. 522, 524, 851 P.2d 147, 149 (App.1992).12 Does it therefore follow that everyone taking a prescription medication is a suspected criminal who is subject to a home search and arrest? The answer is obviously no, because the bare fact of possessing a prescription drug does not cause a reasonable person to suspect a criminal offense. Questions naturally arise about the actor’s status and the circumstances of the possession or use—in a word, about context—before any prudent person would form a belief about the activity being criminal. The mere fact that a prescription drug is possessed, like the fact that marijuana is possessed, is not a sufficiently strong circumstance in itself to allow a cautious person to believe someone guilty.” Therefore, the court held that the mere scent of marijuana, standing alone, was insufficient evidence of criminal activity to supply probable cause for issuance of search warrant, in light of passage of Arizona Medical Marijuana Act (AMMA), which made medical marijuana use legal.

Three days later in the same State of Arizona, their other Court of Appeals in an odor case held the opposite. State vs. Cheatham, held:

“One evening in late May 2013, two police officers were on patrol when they pulled over a car with a dark windshield that appeared to violate Arizona law. One officer approached the driver's window and made contact with Cheatham, the driver. As the officer spoke with Cheatham, he noticed a strong odor of burnt marijuana from inside the vehicle. Cheatham complied with the officer's request to step out of the car and the officer searched the car.

During the search, the officer saw an empty prescription bottle in the center console. The officer opened the bottle and smelled unburnt marijuana. The officer also saw an empty cigar package on the driver's seat. As he testified at the suppression hearing, the significance of the empty cigar package was that people “take the tobacco out of the cigars and fill them with marijuana, and then they refer to those as blunts out in the street. They're marijuana cigarettes.” The officer then searched under the driver's seat, where he found a small amount (described as the “size of a marble”) of what he identified as unburnt marijuana. The officer seized the marijuana and arrested Cheatham. After being read his rights, Cheatham admitted the prescription bottle containing the odor of unburnt marijuana was his.”

“The AMMA does not decriminalize the possession or use of marijuana in Arizona. Moreover, Cheatham has not shown how the AMMA would provide him any immunity or that, on this record, the AMMA eliminates the plain smell exception to the warrant requirement that led to the search and seizure here. The fact that a registered patient under the AMMA with a valid registry identification card can affirmatively claim immunity from arrest, prosecution or penalty for possession or use of marijuana as specified under the AMMA does not eliminate the significance of the smell of marijuana as an indicator of criminal activity in this case. Thus, the AMMA does not mean that the plain smell of marijuana is no longer sufficient to establish probable cause under Arizona law.”

“Cheatham argues the superior court abused its discretion by denying his motion to suppress because the only evidence supporting probable cause for the warrantless search of his car was the smell of marijuana. Under the plain smell doctrine, a police officer may conduct a warrantless search and seizure of contraband if: (1) the “officer [is] lawfully ... in a position to [smell] the object;” (2) “its incriminating character [is] immediately apparent;” and (3) “the officer [has] a lawful right of access to the object.” State v. Baggett, 232 Ariz. 424, 428 ¶ 16, 306 P.3d 81, 85 (App.2013) (citations omitted). There is no dispute that the officer was lawfully in a position to smell the marijuana and had a lawful right of access. Moreover, in this case, the odor of marijuana provided sufficient probable cause that marijuana was present and that a crime was being or had been committed. See Harrison, 111 Ariz. at 509, 533 P.2d at 1144; Baggett, 232 Ariz. at 428 ¶ 20, 306 P.3d at 85. Accordingly, the record at the suppression hearing was sufficient to support a finding that all three requirements of the plain smell doctrine were met. Thus, the superior court did not err in denying Cheatham's motion to suppress.”

We will just have to wait and see how the Arizona Supreme Court decides the conflict. It should take a year to eighteen months to find out. Stay Tuned, this just might provide us with the first State Supreme Court ruling on odor and medical marijuana and probable cause.

Ted Daus is a prosecutor in Fort Lauderdale, FL with 25 years of experience. He has extensive experience on K-9 search and seizure and lectures regularly to K9 organizations. He was counsel of record for two United States Supreme Court Cases K9 cases: Florida vs. Harris and Florida vs. Jardines.